Click the links in the table of contents below to take you to that section of the page:

1) Why does the hidden VOID message appear when I unwind the tape?

Unwind the tape slowly. Dispensing the tape too quickly (faster than 12 inches/second) from the roll may prematurely reveal the hidden VOID/OPENED text. However, if the problem persists even when unwinding slowly, please contact us.

2) How quickly will the tamper evident feature be functional?

For the recommended surfaces and an application temperature of 70F (or higher), the tape will show tamper evidence (OPENED) after being applied to the surface for these typical intervals:

Application at temperatures less than 70F may require more cure time on the surface.

3) The tape can be removed cleanly and it does not show the tamper evident message (OPENED). What's the problem?

Let's work through the checklist.....

If you cannot identify the problem from the above steps, the tape selected will not meet your needs. Please contact us for next steps.

4) When the tape is removed, it tears fibers from ('scalps') the surface and the tamper evident message (OPENED) does not appear. What's the cause?

Tearing fibers can be an issue for materials with low surface strength -- usually paper, paperboard, and recycled corrugated cardboard.

Some applications will accept torn fibers as an indication of tampering, particularly if the torn surface has printed text or graphics, which makes the tampering more prominent. However, ideally when security tape is removed from the original surface, there will be a clear tamper evident message on the surface and in the tape and no scalped (delaminated) surface.

Delaminating the box surface is an indication of lower strength in the carton surface compared to the 'breakaway' level of the tamper evident message (OPENED) in the tape.

Absorbed moisture in the corrugated material can be a contributing factor because it reduces the carton's surface strength. Store cartons in a controlled area to keep them dry.

Often, the culprit for paper-type products is high recycled content, which usually has a lower surface strength compared to virgin content. So one option is to change to packaging materials with a higher strength - those formulated with higher virgin content.

Another possible cause is the surface construction. Short fibers or low binder levels in the corrugated material can reduce the surface strength. Again, to eliminate this cause requires a change in the materials.

Look for markings on the box which indicate the strength of the carton surface. For example, a carton marked ONLY as "ECT 32" (which refers to Edge Crush Test) is generally an economy grade box. Cartons marked "200 lb" and "275 lb" (which refers to burst strength) usually have higher strength surfaces which are not prone to delamination.

If delaminating the carton surface is an issue, our 'full adhesive transfer' tapes (PVT/EVT, PFT,EFT or RC series) have the highest probability of success because the "breakaway" level of the hidden message is lower compared to our standard tapes.

5) What is the difference between a paperboard box and corrugated cardboard?

Here are typical examples of each:

Regarding compatibility, most of our security tapes work equally well on both paperboard and corrugated cardboard. However, we provide free samples so you can test and confirm the product suitability before ordering.

6) Does the corrugated carton or paperboard box have a marking which indicates the surface strength?

Currently, there are no markings to indicate surface strength, which is a key parameter to avoid tearing fibers (scalping the surface).

Most shipping cartons include a printed information on the box bottom which indicates structural capabilities, such as:

But none of these characteristics pertain to the cartons's material surface strength.

But it's easy to test for surface strength; just order our free samples, affix to your surface, then remove after 1 minute.

Most of our security tapes perform well on paperboard or corrugated. Our "full adhesive transfer" tapes (PVT/EVT, PFT/EFT and RC series) have the most versatile performance for high recycled content cardboard.

7) Do we need a special tape for the corrugated boxes used in our freezer?

Corrugated cardboard used in refrigerators and freezers may have moisture resistant coatings (wax or other chemicals). Without these coatings, condensation can reduce the structural integrity of the carton. However, these coatings can reduce the bond between the tape and surface. Also, the coatings may reduce the effectiveness of the hidden tamper evident (OPENED) feature.

Our "full adhesive transfer" formula tapes (PVT/EVT, PFT/EFT, and RC serieis) have the highest probabiliy of success on cartons which have a moisture resistant coating.

8) The tape is being applied to stretch wrap film. When removed, the film tears. How do we eliminate tearing the film?

Tearing the pallet film can be an issue for pallet film materials with low strength. Using a thicker stretch wrap film will increase the surface strength and eliminate the problem.

Another option is to use our "full adhesive transfer" tapes (PVT/EVT, PFT/EFT and RC series), which have the highest probability of success on shrink and stretch films.

The problem is probably related to the silicone coating on the underlying tape, which is interfering with the adhesion of the security tape. For the best adhesion, apply the security tape directly to the carton. Our security tape is designed to be used in a single layer to both seal the carton and provide tamper evidence. If the security tape crosses over other tape, extending the top tape layer a few inches to be in direct contact with the carton will insure the tape ends are secured.

10) What is the shelf life of tamper evident tape ?

Recommended storage temperature is 40 to 80F. The maximum temperature prior to application is 100F. When stored under these conditions, we warrant the tape will have a MINIMUM shelf life of 2 years from the date of purchase. Our experience indicates the shelf life can be over 5 years, but we only warrant the tape for 2 years from the invoice date.

In the unlikely event you have a shelf life issue with your tamper evident tape, you will have one of the following conditions:

11) Why does the security tape pop loose on the sides and not tamper after sealing the shipping carton? 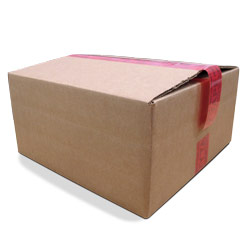 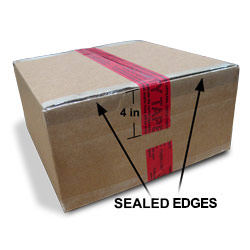 Some boxes have excess 'spring' in the flaps (see Photo A), which can be caused by overfilling the shipping carton. Also, thicker corrugated cartons can have excess spring in the flaps. When the flap is closed, the spring causes added stress in the tape affixed to the side of the box, and this continuous pressure can cause the security tape to pop loose from the side of the box. If there is excess pressure from the flaps, usually the tape will pop loose within 6 hours.

This situation can be resolved by using standard carton sealing tape to seal the edges of the top flaps to the side of the box (see Photo B). Or you can use security tape as well. Another, option is to glue or staple the flaps closed before applying the security tape to the center seam.

When the excess spring has been addressed, use the security tape to seal center seam. Extend the tape at least 4 inches down the side of the box. Repeat this process for the bottom of the carton.

12) One side of the roll of tape is bulging out -- what is the problem? 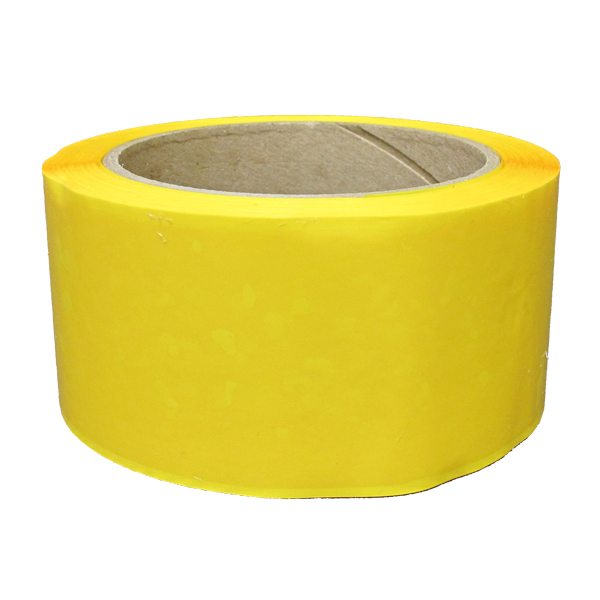 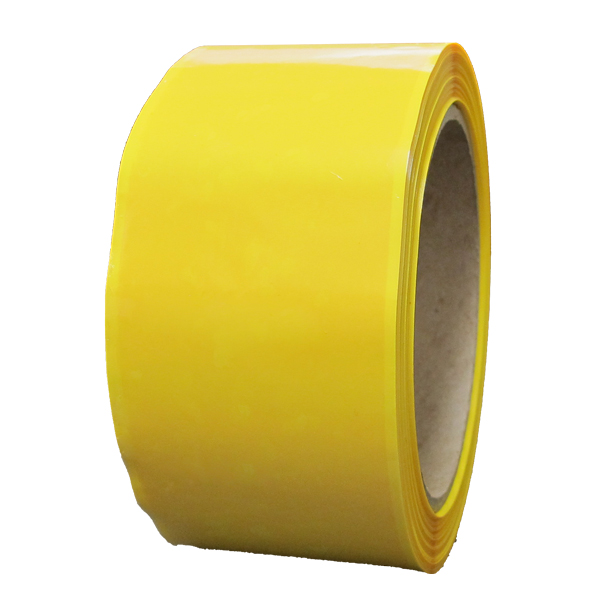 Storing on End Can Cause Coning
(Edge of Roll NOT supported) 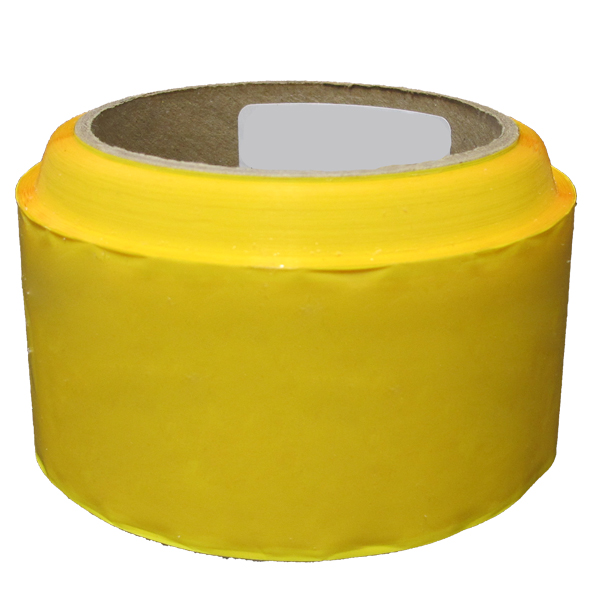 If Coned, Place Roll in This Position

Coned Roll After 1 week (usually). If not, give us a call.